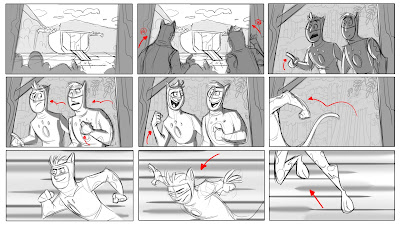 Been behind a computer for the past few months at Disney, and I haven't done as much drawing as I should. Finally getting comfortable with CG, and I'm really enjoying my time at the studio...I still geek out every morning when I see Mark Henn and Nik Ranieri. These are board revisions I did back in January of this year on a show called "Wild Kratts" with the title brothers Chris and Martin Kratt (aka the Kratts brothers). I used to watch Zoboomafoo and Kratts Creatures when I was young, working on the show and with the brothers was a blast! These are based off Simon Paquette's (the  talented director's) thumbnails. 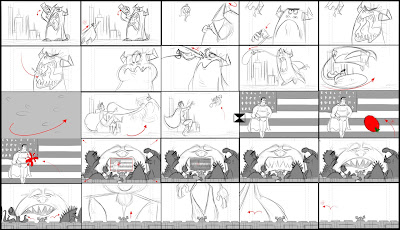 Here are some rough and dirty boards I did for the short film titled "Attack of the 50 ft Hero". Myself and 12 other students/professionals worked on the classically animated shortfilm under the guidance of Master Animator Eric Goldberg; whom I now have the great pleasure of working down the hall from. These boards were discarded, so the final film looks nothing like this...thank god! 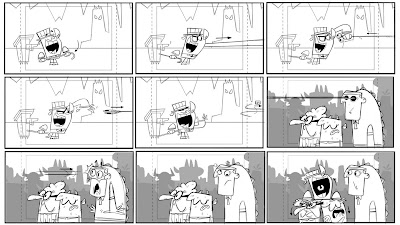 ﻿
Last but not least, some old boards I dug up from Jimmy Two Shoe's: season 2. These were done for a 1 minute vignette, and I'm not sure if it ever actually got animated...
This was my first job doing boards ( September 2009); I did clean-up, revisions and boarded the vignette, working under the super talented duo of Kyle Marshall and Steve Lambe.

Well, I guess I'm retirering from boards and 2d animation for a bit, and focusing my efforts in CG animation for the next while. Thanks for checking out the blog, and for all the support! Anyone still read this thing? More posts to come in 2013, Happy Holidays!!!
﻿
Posted by Trent Correy at 9:58 PM 8 comments:

Trent Correy
I'm just a guy with a hobby... sometimes people pay me for it.